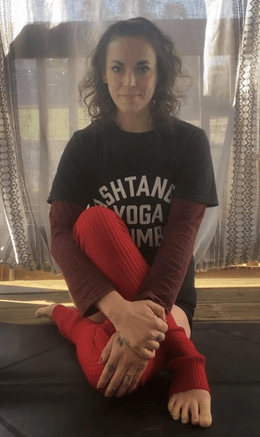 I believe the Ashtanga method is and has remained one of, and at times the greatest, tool to my sobriety.

“I grew up with alcoholics and addicts until I began to date alcoholics and addicts. I ignored my co-dependency, and my own growing dependency on alcohol, which was easy to do. I found ways to blame the outside world for my problems within my toxic relationships, as well as my overwhelming feelings of guilt, shame, resentment, anxiety, and depression. I told myself I did not have an alcohol problem because I could put it down, I didn’t make a habit of driving drunk, I didn’t steal for the substance, etc. Alcohol is legal, and it is a major part of our culture, and I used these facts to justify drinking every single day. I told myself if I quit, I would not be able to sleep, despite dealing with poor sleep patterns from passing out drunk and waking up throughout the evening, shaky and panicked.

My “bottom” was not the result of losing everything as a result of my habit, and my “bottom” didn’t feel like a quick process. I first began to acknowledge the problem with drinking alcohol after my children were in a car accident, of which the driver was both their caretaker and extremely drunk. His refusal to seemingly acknowledge the severity of his own addiction encouraged me to begin to examine mine. Meanwhile, I had fallen deeply in love with one of my best friends- a man in the midst of an opiate relapse, of which I believed if he did not get sober, he would die.

Even so, it was nearly a year before I attempted sobriety for the first time, and relapsed happily after seven months. I still did not call my dependency exactly what it was: a substance abuse problem. After two months of returning to alcohol, I chose sobriety again, this time having felt all of the areas: mentally, spiritually, emotionally, physically, and financially, where alcohol negatively impacted me. The man who had been my best friend had at this point become my husband, and I likewise recognized we could not have the life we desired, or be the parents we desired, while giving in to our addictions.

Rather than walk through sobriety as a “dry drunk”, I began to attend Alcoholics Anonymous meetings and retained my yoga asana practice- of which I had begun practicing the ashtanga method within the year prior. I found solace in both the acceptance of AA and the continued discipline of Ashtanga. The twelve steps program and Ashtanga, including the amazing communities within both, are why I am able not only to remain sober, but to do the difficult work which led me to my addictive behaviors.

I wanted to become an ambassador for the Trini Foundation because I recognize and live a life which has profoundly changed for the positive since gaining my sobriety, the 12 steps, and the Ashtanga method. I believe the Ashtanga method is and has remained one of, and at times the greatest, tool to my sobriety. The very least I could do is attempt to aid in spreading the message and information regarding Trini Foundation’s programs.”