"Yoga is the glue that has held me together through a lot of ups and downs." 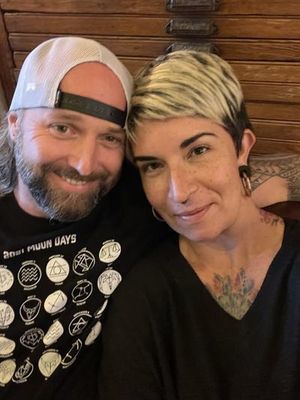 “My name is Jamie and I’m 39 years old. My story with addiction starts with an eating disorder that started when I was 15 years old and checked myself into a treatment center when I was 20. It helped, but along the way I fell in with a crowd that led me down some dark paths. The connections I made at the rehab facility led to drugs and drinking. I turned 21 while I was getting out of the program and though I had stopped most of my eating disorder behaviors of bulimia, I found myself turning to alcohol and eventually drugs instead.

A friend from treatment asked me if I wanted to try speed at a party and I didn’t really know what it was, but I was immediately addicted. The next morning I woke up feeling horrible, like I had been hit by a train, but all I could think about was finding more speed. It quickly turned into a problem. Within a month, I was homeless and living out of my car. I eventually moved to Las Vegas where I lived away from my family for one year. It wasn’t until four months into using that I learned I had been doing meth and that meth was speed. I was so upset with myself, but I didn’t stop.

I also became an alcoholic while living in Las Vegas. Eventually, I physically hit a low. I had no money and had been fired from all my jobs. I packed everything I owned and drove myself and my kitten, Bella, to Pleasanton, California to live with my parents.

As I tried to get my life together, I signed up for Massage school at 23 years old. This was my first exposure to a holistic way of living. I went to my very first Yoga class and knew I had found something special that I had been missing and wanted more of that. I dipped in and out of sobriety and eating disorder behaviors. I stopped using meth long before I had kids. I quit cold turkey. I just decided one day I would never do it again and I never did. I replaced it with smoking cigarettes, drinking wine, and smoking pot.

When I met my now ex-husband and we found out I was pregnant, I immediately quit smoking and drinking. After that I had gone years with no drug use or feeling like I had an issue with drinking, but I kept hearing this message while I would practice being sober. I finally listened and in 2018 decided I would become a sober person.

For me, becoming a mom probably was the biggest thing that saved me. When I met my now ex-husband, I was relatively healthy and had my life together at that point. I was 25 and we got pregnant, got married and had another baby. Becoming a parent changes you. I gave up cigarettes and drinking when I found out I was pregnant and never picked up cigarettes again. My life changed dramatically since becoming a mom. Though it wasn’t what I ever wanted or set out to be, it’s the best gift I’ve ever been given.

I also have a close family member who struggles with addiction and alcoholism. It has been the hardest thing to feel so unbelievably helpless. I’m blessed beyond belief to have my husband Ryan who is everything I ever dreamed of. We own a Yoga studio together and raise our 4 kids. He is my rock and supports all my wild dreams and ideas. Yoga is not the end all be all, I think working 12 steps, therapy, etc. is vital. Yoga is the glue that has held me together through a lot of ups and downs. Ashtanga has changed my life in so many ways. I am a person that needs structure and discipline and I find that when I’m really on point with my practice everything else in my life is better.”